The increasing presence of criminal groups and their struggle for territorial control create an environment where Christians—and particularly Christian leaders—face the constant risk of being targeted for violence. Christians are perceived as a threat to criminal activities because they oppose corruption and drug use, or because they explicitly reject any demands or requests of criminal organizations. Christians who are outspoken about the hope of Jesus in the face of drug trafficking and violence are often targeted by gangs to remove any obstacle in their quest for control.

In indigenous communities, anyone who decides to abandon the community’s religious beliefs or syncretistic practices often faces rejection and punishment in the form of fines, incarceration or forced displacement.

Finally, there has been an increase in violent and discriminatory acts against Christians by people who believe Christians are bigoted, xenophobic or opposed to women’s rights. Churches have been attacked and graffitied by protestors, and reports on the ground suggest openness to Christian ethics in the public sphere is decreasing, even though Mexico is supposed to value pluralism.

Mexico shot up the 2021 World Watch List after being outside of the top 50 entirely last year. This is likely due to the rise in illegal activity that directly challenges Christians and Christian teaching. Drug traffickers and gangs retaliate against and target Christian leaders for opposing their criminal activities, and during the COVID-19 pandemic, their control over parts of Mexico has strengthened. Similarly, indigenous communities that oppose Christian converts have strengthened their autonomy during the coronavirus crisis, leading to increased difficulty for these followers of Jesus. And finally, Mexican society seems to be increasing its commitment to secularism instead of pluralism. Often, Christian viewpoints are not welcome in the public sphere.

Criminal networks have spread throughout Mexico. Although there are still two main cartels in Mexico, there are others—at least 17 criminal groups—that have a significant presence in the country. That doesn’t include the new or fragmented groups, who also persecute Christians because they perceive Christians as threats to their group’s interests.

Persecution against Christians inside indigenous communities occurs particularly in the southern part of the country. And the rejection of Christian viewpoints in the public square is increasingly an issue throughout Mexico.

The ministry of Open Doors in Mexico works to bring structural change to the persecution situation in Mexico by helping to provide solutions to the spiritual and material needs of persecuted believers. Open Doors also engages and equips the Mexican church to reach out directly to those suffering persecution. 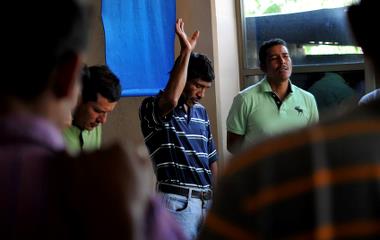